The future of UK tax after coronavirus

The coming six months are set to be very interesting in the world of tax. So far, 2020 has seen unprecedented levels of Government support in the wake of coronavirus in the UK. We’ve seen Government-backed loans, grants, the furlough scheme, deferral of tax payments, rates relief, temporary VAT cuts and the Eat Out to Help Out Scheme. All of this support comes at a significant cost to the UK Government.

When the Chancellor Rishi Sunak set out his Budget in March, the OBR had forecasted a budget deficit for the year of £55 billion. Some two months later, a Treasury document was leaked to the press which suggests that the base case budget deficit will increase to £337 billion for the year. This revised figure isn’t surprising, as of the 2 August, £34 billion alone has been claimed under the furlough scheme.

With the significant increase in the budget deficit, what measures can the Government take to tackle this? There are two schools of thought here. Reduce public spending – This is simply a case of Government spending less. Given the austerity measures over the past decade, I question how realistic further cuts will be. Increase the tax take – This can be done in several ways; reduce the tax reliefs available, increase the tax rates and increase economic growth (i.e. more growth = more income = more tax paid). Regardless of the approach, it’s also likely that HMRC will increase its compliance activity to ensure the correct amount is paid by taxpayers.

The remainder of this article looks at some of the discussion currently circulating within the tax profession about what might happen in the Autumn Budget later this year.

In Boris Johnson’s election manifesto in November last year, the Conservative Party pledged a “triple tax lock” whereby the rates of income tax, VAT and National Insurance will be frozen for five years. It’s likely this election pledge will be broken as the leaked treasury document stated, “to fill a gap this size through tax revenue risers would be very challenging without breaking the tax lock” and goes on to state, “to raise fiscally significantly amounts, we would either have to increase rates/thresholds in one of the broad-based taxes (Income Tax, National Insurance, VAT, Corporation Tax) or reform one of the biggest tax reliefs (e.g. pensions tax)”.

To give the £282 billion increase in the budget deficit some context, HMRC has calculated the additional tax revenue that would be generated by various tax rate increases. I’ve summarised these in the following table.

A rise in National Insurance?

It seems highly likely that we will see changes to National Insurance for the self-employed. There has been debate amongst the tax profession for the last couple of years about bringing Class 4 National Insurance in line with Class 1 National Insurance. Class 4 NIC is paid by the self-employed at a rate of 9%, whereas Class 1 NIC, paid by the employed, is at a rate of 12%. It now seems inevitable that these two rates will be aligned. During the Chancellor’s speech to announce the Self-Employed Income Support Scheme, he said:

“I must be honest and point out that in devising this scheme – in response to many calls for support – it is now much harder to justify the inconsistent contributions between people of different employment statuses. If we all want to benefit equally from state support, we must all pay in equally in future.”

I should highlight that Class 1 NIC is also paid by employers as well as employees. More radically there has even been discussion about bringing the Class 4 rate in line with the combined Class 1 employee and employer rates. The Institute of Fiscal Studies has argued that Class 1 employer NIC significantly affects the cost of hiring staff and thus discourages employment when compared with the National Insurance cost of being self-employed.

What other taxes could increase?

At the moment it seems unlikely that we’ll see an increase in the rate of Corporation Tax. The rate was due to be reduced to 17% in April, but this was cancelled, and the rate remains at 19% (the average rate across the EU is currently 20.87% and the global average is 23.79%). Over the past 40 years, Corporation Tax rates around the world have consistently declined. With increased globalisation, the Corporation Tax rate is a good marker in what attracts international businesses to set up in the UK. I’ve summarised the current rates of a few competitor countries below for comparison. 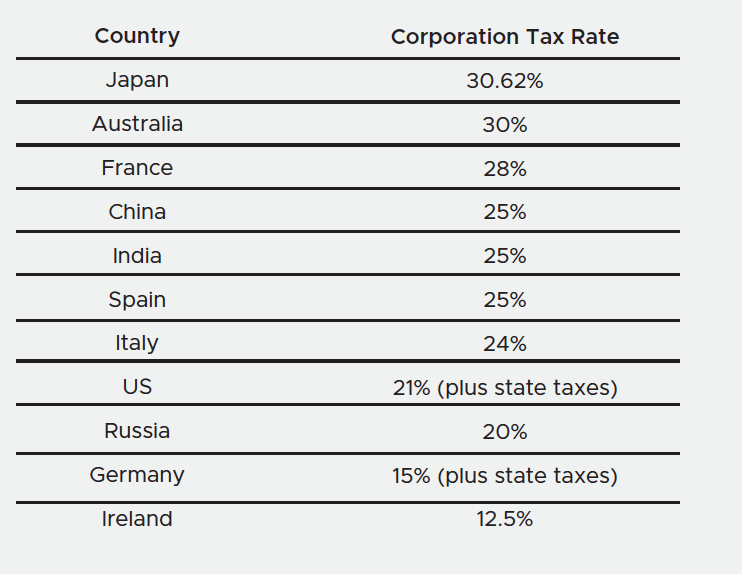 An increase to Capital Gains Tax or Inheritance Tax may be less controversial politically. Neither are particularly high yielding taxes, so it would require a radical reform to make any significant impact on the budget deficit. The talk in the tax press at the moment is whether IHT should be scrapped and replaced with a system whereby tax is levied whenever capital assets are transferred, either on death or during a person’s lifetime. The UK previously had this type of tax system in the 1970s and 1980s. Other suggestions include increasing the rate of Capital Gains Tax to bring it closer to the Income Tax rates and scrapping the annual allowance for Capital Gains Tax for higher rate & additional rate taxpayers.

Could a wealth tax be coming?

Lastly, there has been a lot of discussion in the press lately around the introduction of a wealth tax. It appears to be a popular opinion (supported by my recent poll on LinkedIn and a recent YouGov survey – see below) that the wealthy should foot the bill for the coronavirus support. 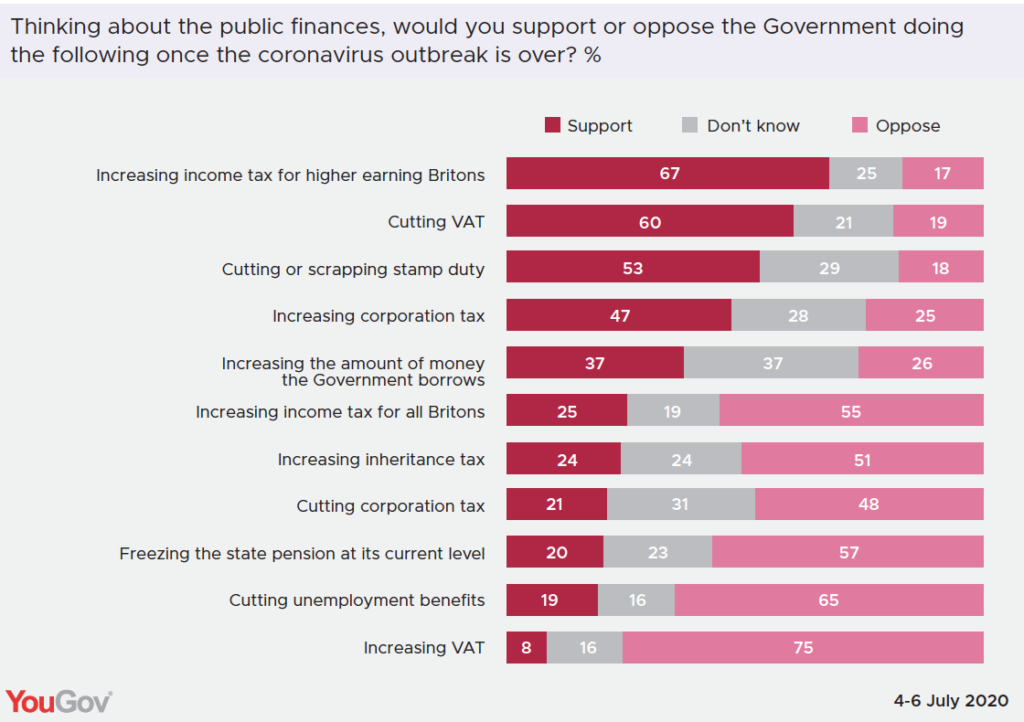 A number of millionaires and billionaires from around the world have called for higher taxes on their wealth to help fund economic recovery. The group, including Ben and Jerry’s ice cream co-founder Jerry Greenfield and Disney heir Abigail Disney, called on “our governments to raise taxes on people like us. Immediately. Substantially. Permanently”.

The concept of taxing people’s wealth already exists in four other European countries. The four are Spain, Norway, Switzerland and Belgium. By way of an example, in Norway, anyone with total assets valued above 1,500,000 NOK (roughly £130,000) is defined as wealthy and is subject to annual tax based on 0.85% of their wealth. A taxpayer’s main home is discounted when assessing a taxpayer’s wealth by reference to the threshold. In all four countries, the wealth tax is not a major revenue generator. The largest is Switzerland where the wealth tax is up to 1% of a taxpayer’s net worth and makes up roughly 4% of total Swiss tax revenue. For context, 4% of the total UK tax revenue would be around £25 billion.

In the UK, a wealth tax would be very difficult to implement, particularly when compared to some of the other options discussed above. We would need to create an entirely new reporting system to deal with this. It also brings in questions around the valuation of assets, how to deal with unrealised gains and would be problematic for those who are asset rich but cash poor. Would they be required to sell some of their assets to be able to pay the tax?

A senior economic lecturer from Manchester Metropolitan University has argued that a one-off wealth tax would make more sense as it would raise funds from current rather than future taxpayers. He has estimated that a one-off levy of 2% on UK households net wealth could generate £300 billion of tax revenue. This is based on property less outstanding mortgage balances, financial assets, savings, businesses and pensions. This still has the same implementation challenges as a broader wealth tax.

Raising taxes has not traditionally been the approach of Conservative governments. Will this be the year of change? Sir John Major has already publicly said that we should wait until the economy has recovered before raising taxes. Business owners will need to keep a close eye on developments over the coming months and the Autumn Budget could be set to be the most important in years.