The billion-dollar player: How eSports is dominating the gaming arena

Often touted as a billion-dollar industry, eSports, the professional competition of playing video games, is one of the most innovative and fast-growing industries. It has witnessed tremendous growth in terms of viewership and revenue over the last few years.

The UK is part of the global eSports growth story, estimated to have grown at an annual average rate of 8.5% between 2016 and 2019. The value of the UK video game market is estimated at £5.7 billion, making it the sixth-largest video game market in the world and accounting for half of the whole UK entertainment market. Irrespective of the current social and political landscape, the UK has done exceptionally well at organising large eSports events and now plans to position itself as a world leader in the growing European eSports industry.

The wider emergence of eSports as a global phenomenon has occurred alongside a number of trends. The developments in audience viewing habits, including the ability to live-stream gameplay through channels such as Twitch and YouTube has enabled the viewership figures to increase significantly. As the global audience of eSports grows towards one billion, revenues from sponsors and licencing deals are pouring in. Even some of the biggest names have invested in eSports teams including former sports stars Michael Jordan and David Beckham, as well as musician Drake. 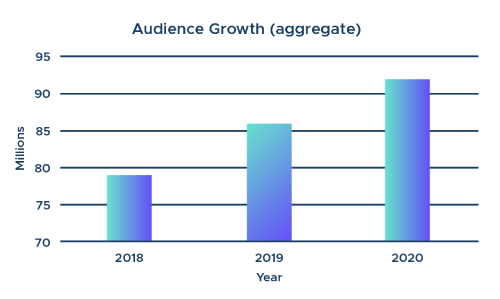 eSports revenue has experienced substantial growth over the past five years. According to Newzoo (eSports analytics and market research source), global eSports revenue in 2019 was $950.6m and is expected to exceed $1.1 billion in 2020. The UK eSports sector generated around £60m in revenue in 2019, around 8% of the global market. The eSports sector has had an immense impact on the UK economy. The increase in revenue has translated into a number of job opportunities within the sector.

Like many other industries, parts of the eSports industry have been badly disrupted by the COVID-19 pandemic with the cancellation of live events, however some events have continued remotely. During lockdown, several sports delivered eSports alternatives – Formula 1 streamed its first-ever Virtual Grand Prix with races held for every postponed Grand Prix, featuring a number of current F1 drivers. Popular broadcasters including the BBC have turned to eSports to fill their schedule, providing entertainment and engagement for millions of people during lockdown.

The UK is home to several eSports success stories. In 2016, Team Dignitas, founded in 2003 was acquired by the Philadelphia 76ers, making them the first North American sports team to own a UK eSports team. Further investment in UK eSports teams has followed, but now high net worth investors and investors funds are keen to get involved.

Whilst eSports teams seem to dominate the headlines, it takes video game developers, tournament operators, venues and broadcast platforms to create an ecosystem in which eSports can thrive. The technology behind the scenes that makes eSports possible can be just as valuable as the individuals competing.

We are witnessing a rise in eSports-specific private equity funds being established in order to take advantage of the exponential growth in the sector. In the UK, Hiro Capital has launched a €100m fund to invest in innovators in the EU and UK’s video games, eSports and digital sports ecosystem. Private equity funds are looking to seek out the best businesses with strong management teams which they can back for growth. Private Equity becoming a player in eSports will create several opportunities for the sector and the owners of high-quality businesses within the space.